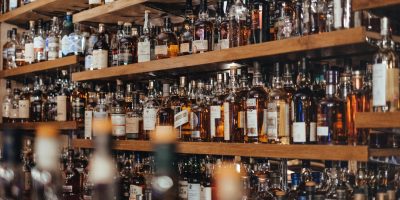 Whisky 101: From grain to glass

Whisky is made in many countries around the world and is the product of grains. Commonly these are wheat, rye, barley & corn, and usually, a mixture is used to make up the ‘mash bill’. Historically, the exact grains used were determined by the climate, and what was grown locally. For example, barley in Scotland and corn/rye in North America.

The base grains used can impact the style and flavour of the final spirit. For instance, rye adds a spicy, peppery taste. Corn adds a soft popcorn creaminess and rich syrup taste. Wheat creates citrus and bready/honey characters and barley a toasty/caramel and dried fruit/peel nose.

As this is such an important part of the identity of each nation’s whiskies, the use and proportions added are often mandated. For instance, straight Bourbon must be a minimum of 51% corn and single malt scotch whisky can only be made from malted barley.

The science behind the tipple

Grains are effectively seeds and intended as food storage for a new plant. Once the grains are harvested and ready, the carbohydrates, which yeast cannot use, must be converted into simpler sugars. This is done by either simply cooking the grain or by malting, which triggers the grain into sprouting and creating natural enzymes to break them down, by generating warm, humid conditions.

The sugars are extracted by adding hot water, creating a solution called wort, in a similar way to beer. This sugary solution is then fermented to create alcohol, along with some other natural fruity flavours created by the yeast, known as esters.

The ‘beer’ comes out at around 9%abv. To increase the alcoholic strength to spirit levels, it is then distilled. Historically, this was done at least twice in batches using ‘pot stills.’ The first distillate is referred to as ‘low wines,’ and comes out at a strength of around 35%abv. This needs to be redistilled. Pot stills are not very efficient, and the ‘white dog’ (new make spirit) is quite rough around the edges, but they do create more characterful flavours. Because of this, again some styles mandate use of pot stills only, such as Bourbon and single malt scotch.

Some distilleries choose to distil a third time to soften the new make spirit further. Typically this is done with Irish whiskies but there is no legal requirement to do so.

‘Grain’ whiskies are made for blends. These are usually distilled in column stills, which are much more efficient and concentrate the alcohol to higher levels but produce lighter spirits as a result. Typically, these are then blended with malt whiskies from different batches from the same distillery, or from multiple distilleries with different styles to get a standardised flavour.

The final step is ageing. This is done in wooden barrels, typically oak. Wood barrels are porous, and allow the spirit to ‘breathe,’ exposing it to very small amounts of oxidation, flavours from the wood itself and softening it at the same time due to evaporation (known as ‘the angel’s share’). The type of wood material used, and any previous contents have the biggest influence on the flavour profile. The climatic conditions of storage also play a part, ageing slower in cooler regions and quicker in warmer/humid areas.

Bourbon is dominated by American Oak flavours, and the barrels must be brand new for each fill and often heavily toasted. This adds the prominent coconut, vanilla, chocolate and cedar wood character Bourbon is famed for. In addition, in Kentucky where most Bourbon is produced, conditions are warm and humid so the whisky ages rapidly. Typically most are only 4-5 years old on release. Not surprisingly, this creates a plentiful supply of secondhand barrels- which are greatly received by other whisky producers, who are looking for more subtlety of flavour. This means that ex-Bourbon barrels are the most common and cheapest to use.

Many other whisky types, in particular Scotch, do not require such brash flavours. Or they want a complex blend of different flavours. Therefore, as well as ex-Bourbon barrels, quite often they will use casks that had previous contents. The common ones include Sherry, Port, Marsala/Sauternes & Burgundy. But there is no limit to these and often lots of experimentation is going on behind the scenes. For instance, many are toying with barrels used to age Tequila!

The whiskies may be aged in one type of cask, or spend time in multiple types. This adds a whole array of subtle flavours from their previous contents- for example, Sherry commonly gives toasted nuts, dried fruit and floral notes, Marsala and Sauternes provide honey and marmalade flavours.

Ageing time is the final influencing factor. The legal minimum is three years in most cases, but most producers far exceed this. It can be many decades, and because evaporation rates increase as the spirit is stored longer, these are rarer and more expensive. However, many distillers and their employees agree there is a sweet spot in most cases of between twelve to eighteen years. They feel this provides the optimum balance of flavour and softness in the spirit.

Once the whisky has reached the desired ages, different casks and distillery efforts may be blended once again to get the profile the head distiller is after. Most are then diluted down to a typical bottling strength of 40% abv, though some are ‘cask strength,’ which means they have been bottled directly from their barrels. These can range from 55-65%abv, and have much more of a kick!

We are big fans of whisky here and could talk about it all day long! If you love Whisky as much as we do, check out what tasting events we’ve got coming up at Northern Wine School here.