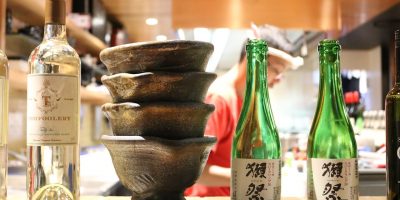 What is Sake? Everything you need to know!

Sake is a fermented rice-based alcoholic drink. Traditionally associated with Japan, where it originated from, it is now made all around the world. Contrary to popular belief, it is not a ‘rice wine,’ type of beer, or distilled- it is not a spirit either. Because of the unique brewing process, and the special strains of yeast used in its production, it has naturally higher levels of alcohol than most wines or beers. However, typically it is between 13-20%abv which puts it in line with the strength of most wines.

Just like wine, there are special varieties of rice used in Sake’s production each with its own qualities that shape the character of different Sake. There are also many different styles, each with its own aromas and flavours. While Sake is much higher in savoury, ‘umami’ flavours than wine or beer, you can also find crisp, light & fruity examples as well as sparkling Sake and aged examples with similarities to Sherry or Port.

How is it made?

Special varieties of rice are harvested, the grains are then polished washed and partially steamed ready to be fermented. Sake rice is different to regular table rice. It has an outer layer of proteins & fats, with the core (known as the Shinpaku) containing carbohydrates. The more the grains are polished, the more proteins and lipids are removed from the rice, and generally the lighter & fruitier the style of Sake.

The bran and the endosperm are removed from all rice grains, no matter the grade of Sake. This means that the natural enzymes that would convert the starch to sugars are also removed. Simply cooking the rice would not break enough of the carbohydrates down for yeast to use, so another organism is also used in brewing- Koji. Koji is a mould, which is deliberately introduced to a proportion of the steamed rice. The koji grows and as it feeds on the carbohydrates in the rice, it creates simpler sugars as a bi-product. Once the rice has a healthy population of Koji mould, it is mixed back with the rest of the steamed rice, water & yeast. Fermentation begins and lasts several weeks to a month, with the koji and yeast coexisting with one another throughout.

As well as creating simpler sugars that yeast can consume, the Koji mould also creates additional peptides and amino acids, which flavour the Sake and give it a more savoury, ‘umami’ rich character which is not found in beer or wine. This makes the aroma and flavour profile of Sake unique, with characters like toasted cereals, dairy, fruit & mushroom/meaty flavours.

Once fermentation is complete, it is then often diluted to the desired final strength using spring or filtered water and bottled. Most of it is released ready to drink and enjoy, but a very small number of special Sakes may also be aged before release (look for ‘Koshu’ on the label).

It is very difficult to generalise about Sake, the best way to experience and try it is to drink it yourself and ask the brewer, or knowledgeable suppliers. There are however some broad categories that Sake falls into that may indicate styles/expected flavours (but not always!)

Futsu-shu (‘ordinary’) Sake. This is not an official labelling term, and you very rarely see it on the bottle. However, you often find it discussed or Sake sold under this designation. This covers most Sake produced, with no requirements for polishing of the rice grains or specific production methods used. However this can range all the way from mass produced, cheaper styles through to the small batch, experimental Sake of some prestigious brewers based on the Tojis’ (head brewers) innovative philosophy. In general, price here is the best guide to potential quality, but there are many fantastic value for money options available for £10-£20. Typically they are more savoury, and enjoyable served at room or warm temperatures, but not always!

The rice used has been polished to a minimum of 70% of the rice grain remaining. Typically, these are a mix of grains (toasted rice/rice pudding), lactic (yoghurt/cream) and savoury, umami characters (mushroom/meaty). They may even have some light fruity aromas too but are often still quite full-bodied.

The most polished grades of Sake. 60% and 50% of the rice remaining respectively. These are typically the lightest, most delicate and fruity styles with pungent aromas of melon, lychee, apple, and peach. They may also have some fresh, green aromas like grass/asparagus too. This is usually the most common style for export markets, as they are especially popular with white wine drinkers and great with fried foods and fresh seafood.

This means ‘pure rice.’ Normally at the end of the brewing process, a small amount of neutral alcohol known as ‘Jozo’ is added to help extract additional flavours, stabilise the Sake and provide texture/mouthfeel. Junmai style sakes indicate that this has not been added, and in theory is more ‘natural.’ The differences in flavour and quality are often very hard to detect though. Again, this is popular with Sakes made for exports to western markets.

This is a term for ‘aged’ Sake. The exact length of time and how the Sake is aged is loosely defined, however. The most popular style is spending some time in cellars maturing in large wooden barrels where the Sake begins to oxidise and develop ‘rancio’ flavours like toasted nuts, coffee, caramel, toffee, dried fruits & more savoury/gamey traits. There are all sorts of weird and wonderful examples though, including some aged in new oak barrels that are used for whisky. Whether this should be done is another matter entirely though!

Like many other beverages, Sake is normally pasteurised before or after bottling before release for sale. This is quite a gentle process, which helps stabilise it by killing unwanted spoilage organisms, but also deactivating the natural enzymes in the Sake that would continue to react and change its character after bottling, often in not a desirable way. Nama is produced in small volumes but has a big following with Sake fans. It is not pasteurised, in theory not ‘damaging’ the delicate aromas and flavours. However, this is the most fragile of all Sake and needs to be drunk ideally ASAP after bottling and handled/stored with great care. This makes it quite a risk when being shipped to far corners of the globe. It can spoil very easily if not kept at low temperatures and out of direct light.

The flavours of the Sake will also change quickly, even if care is taken transporting and storing it. Nutty/savoury characters begin to develop, and eventually, it will taste quite unpleasant to most people with ‘soil/mould’ like aromas. However, it is worth seeking out. Just make sure its journey to you has been a favourable one first!