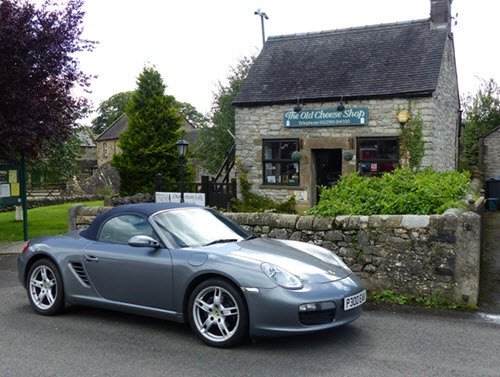 When I was offered use of a Porsche Boxster for a few days, courtesy of Peak Performance Hire, I leapt at the opportunity! Now, we aren’t massive sports or supercar buffs, but the friendly briefing from Liam quickly put us at ease. As he mentioned, despite the engine size and speed, it was just like driving any other car- Albeit a bit fancier than the Hyundai we use to trundle across Manchester, carrying our wine tasting gear!

Zipping around the Peak District in a sleek supercar certainly helped to inspire our research into finding exciting new cheeses, to feature in our ﻿popular Cheese & Wine Matching Evenings﻿. The Peak District is alive with artisan producers.

We decided to camp out in the motorhome at the lovely, picturesque and very rural site, The Firs, near the town of Belper. This gave us an excellent base for exploring the many beautiful local villages and country lanes. We discovered the lovely Old Cheese Shop in Hartington, which had a great range of locally made pickles, beers and cheeses. We settled on a few interestingly flavoured cheddar truckles and a generous wedge of Hartington Stilton.

I was amazed at the immense boot space available in a Porsche! As the engine was situated in the middle, behind the driver, this left room at both front and rear. Although the car could only accommodate two people, it meant there was plenty of space for our haul of wine and cheese! 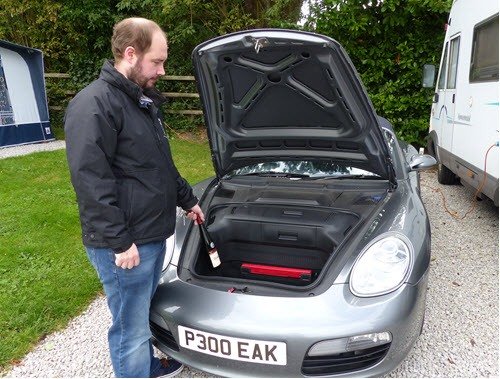 Peak Performance Hire-Plenty of Room for Wine in the Boot

Unfortunately, the patchy showers limited the number of times we could have the soft top down during this adventure. However, the sunny spells in between the rain allowed us to briefly feel the wind blowing through our hair. We could have got used to that! A handy feature of this fabulous car, is that the roof can quickly be opened and retracted at speeds of up to 30mph. Useful for those famous English summer sudden showers! 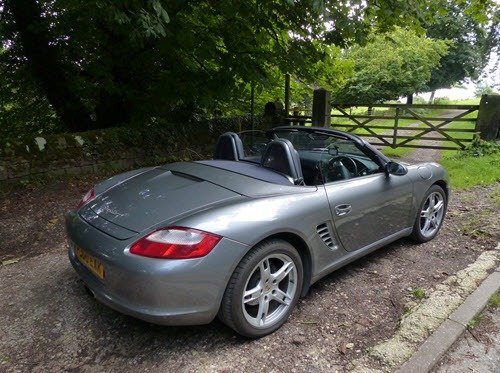 Hood Down for those Sunny Derbyshire Days

The Joy of the Open Road

Thoroughly enjoyed this unique experience, and the time had flown by. Sadly, It had all ended too quickly. What a treat it would be to hire one for 3 or more days to fully explore all the Peaks have to offer. Left feeling like giants now, due to how close the Porsche was to the ground- It took a couple of hours to get used to being high up again! However, the view the Boxster afforded of the panoramic, sweeping countryside, especially when we roared effortlessly up the steepest of hills, definitely gave us a different perspective on things! There really is nothing quite like gliding round those tight Derbyshire bends in a beautiful supercar.