Trip to Gekkeikan Sake brewery, Japan’s biggest producer and exporter. Essentially a giant industrial complex. Our guide kept referring to it as ‘factory,’ rather than a  brewery. Sake was produced on a huge scale, mostly for domestic consumption at this site. Everything was automated- from the rice steaming, Koji making to the final packaging line. We saw very few employees across the whole visit. Unfortunately, we weren’t allowed to take pictures inside the facility, as there was ‘commercially sensitive’ equipment inside. 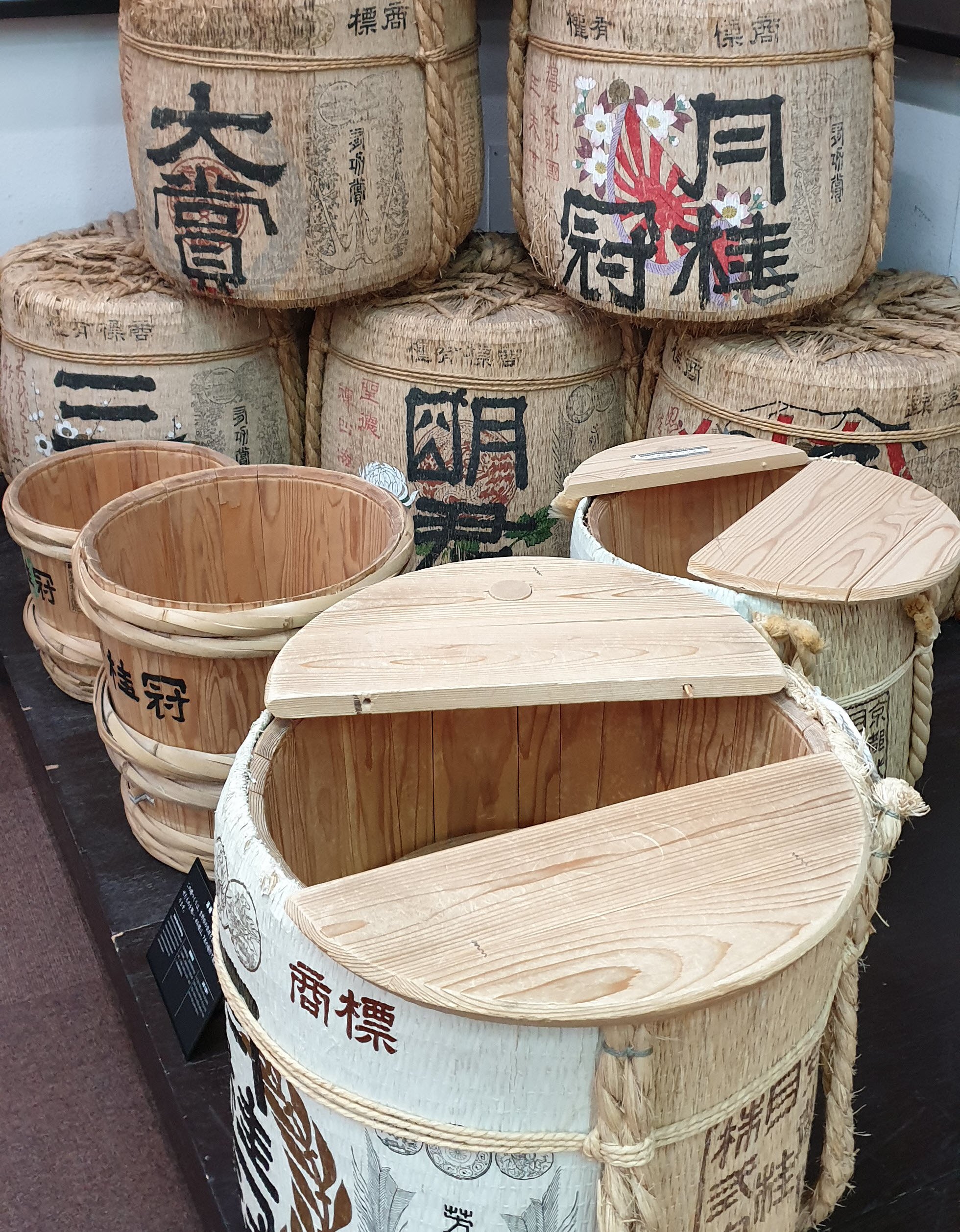 However, we later toured  their Sake museum down the road. This is situated in the original brewery building, built in the 19th century. It featured a history of Sake making, the company itself and a tasting room. It was surprisingly humble compared to many other ‘corporate’ visitors centres I had been to. Inside, there was also a small brewery where they produced competition Sakes and premium drinks exclusively sold in the museum shop.  This was much more artisan, with many of the labour-intensive stages still done by hand. 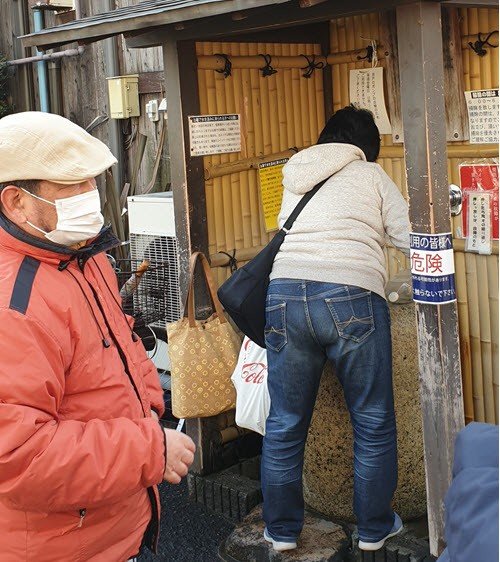 ​We then visited a complete contrast to this- Yamamoto Honke Brewery. This has been family owned since 1677. Situated in the heart of Kyoto, in the Fushimi District. There are dozens of other breweries here too, all utilising the precious, pure waters this area is famed for. Low in minerals, it produces soft and elegant, ‘feminine’ Sake.  There are wells in every other street, and the locals come regularly to collect water for making ‘the best cups of tea.’

In the morning we travelled to Daimon Brewery. Also, family owned for many centuries, Mr Daimon showed us round personally. His whole operation was geared towards premium Sake only, which was intended to be brewed and exported with western tastes and flavours in mind. Sake is being snubbed domestically by younger drinkers, with many preferring foreign wines and spirits, or beer instead. This ethos was about respecting tradition, whilst embracing modern thinking.

Mr Daimon greets us outside his brewery

After lunch, we visited Yagi brewery. Here the owner had revived an ancient process long since abandoned by many producers, called ‘Bodai-moto.’ Lactic acid is an important ingredient to prevent contamination and spoilage by unwanted yeasts and bacteria. Nowadays, it is simply added powdered. The Bodai-moto method involves burying a small proportion of steamed rice in mounds of the raw rice. This encourages wild lactic acid bacteria, and is said to impart a distinctive sweet, rich taste to the final Sake. Yagi are one of only 8 breweries in Nara to have revived this time consuming and labour intensive practice.

An early start. Today we head to Nishiyama to help make some Sake! Kitted out in lab coats, caps and wellington boots, we begin by washing and soaking some rice. This sounds mundane but is carefully timed and done to prevent grains cracking or taking on too much water. Sake rice is much more precious and expensive than eating varieties, especially after most of it is polished away! The crates are then tipped into the steaming vats, sealed with cloth and blasted with high pressure steam for an hour. The aim is to soften the rice, but not cook it. The result is rice that is soft on the outside, but firm in the centre.

A proportion of the rice is then taken to the Koji room, which resembles a Scandinavian sauna, clad in Japanese Cedar panels. Koji is a variety of mould, vital to the Sake brewing process. It converts the large carbohydrate molecules to smaller chain sugars, which the yeast needs as a food source to produce alcohol. The room contains long tables, on which the freshly steamed rice is spread evenly. Koji spores are then sprinkled on the surface. Over several days, the rice is mixed until it begins to clump together firmly. The infected rice is then separated. It is very hot and humid in here, so this was hard work by hand! Once this is done, it is added to a starter culture containing more steamed rice, water and yeast.

Fermentation ‘moromi,’ is the next step. Over the course of a few days, a proportion of the starter, steamed rice and water is added to the tank. It is done over several days, to give the yeast time to adjust to the alcohol gradually. As the contents are pumped in, they need to be mixed continuously. Many breweries now use machinery to do this, but we do it by hand for an hour with paddles (in teams thankfully!) The fermentation will then normally take place over 24-31 days. After all this morning’s hard work, we are treated to lunch and a tasting of the same type of Sake we were making.

After enjoying the long lunch, we travelled to a hotel, with its own on site ‘onsen’ hot spring spa. An evening in there certainly helped ease the aches from a day’s hard manual labour!

An interesting diversion to a traditional rural pottery town, Tambayaki. Craftspeople have been producing exquisite pieces here for over 800 years. There are hundreds of styles of sake cups and serving bottles available. We have a go at making our own ‘perfect serve!’

Next stop, Hakutsuru Sake Brewery Museum. Another large producer with a long history. The museum director showed us around and treated us to a tasting. The gift shop had some beautiful  Sake related souvenirs, and you could even buy Sake flavoured ice cream!

The last brewery we visited, was Hamafukutsuru in Kobe. The enthusiastic owner brought the history and culture of Sake to life, including the songs workers would sing in time to certain tasks, such as mixing the Koji rice and Moromi. They also had some unique Sakes that were aged in ex Scotch and Bourbon whisky barrels, as well as French brandy casks.  These were very potent!

Back to the hotel in Osaka for an exam. Part multiple choice and short answer questions on all we had learned this week. Once the stress was over, we were all presented with our certificates and had a celebratory dinner and drinks.

A unique experience, and we were all very sad it to leave. All of us had travelled from different parts of the world to enjoy it.